When I chose to work in advertising so many years ago I had no idea at the time that it would prove to be so much utter, unmitigated, idiotic fun. Someone, somewhere looked down on me and decided that I needed to come out of the shy shell (yes, those of you who know me now mayn’t believe it but I was once painfully shy) in which I enclosed myself. It was a self that smiled and giggled internally. The giggling I must confess sometimes burst out of control. And then I laughed with such abandon that those around me joined in even when they didn’t know what I was laughing about.

School friends, classmates… you remember. don’t you? In fact recently I met an old friend who asked me, “What happened? When did this personality change take place?”

I had a great time in all the agencies I worked in, and in Canada, I had a wonderful time and a fantastic bunch of colleagues in the advertising department of the provincial newspaper, the Chronicle-Herald. However, I think I had the most fun ever at Fortune Promoseven (FP7). It was also the time that I began to write with a hope to some day become a real writer. With three books out there (Desert Flower, Corpoetry and Five Lives One Day in Bahrain) I guess I can now consider myself one.

I spent my last few years in the industry in Bahrain, with FP7, where, although we were often up to all kinds of high-jinks, believe me, we still got a lot of work done. We were all rather enamoured by our creative director who was a particularly crazy and charismatic person. She was the kind of CD who could whip us all into innovative spurts, even when we were in a post-lunch stupor… who can be inspired at three in the afternoon?

On one occasion, we had a photo-shoot for the department in which we were all dressed in black and white and the shot was in colour. The entire department went up on the roof of the office building. There, avoiding air conditioning ducts, a minefield of aluminium pipes, and all kinds of debris, we posed against a Bahrain skyline that those few years ago was starkly different from what one sees today.

On our way back down, we saw a pair of old workmen’s boots. They were encrusted with dust, bleached the same dun grey as the surrounding building and for no reason at all, other than the fact that we were hyper, a mob mentality took over and we hung the poor things by their laces.

When I returned to my desk, a sombre mood descended on me and I wrote the following piece from the point of view the boots. My CD, now a dear friend, sent it to me from among the debris of her memorabilia, I had no recollection of writing it. 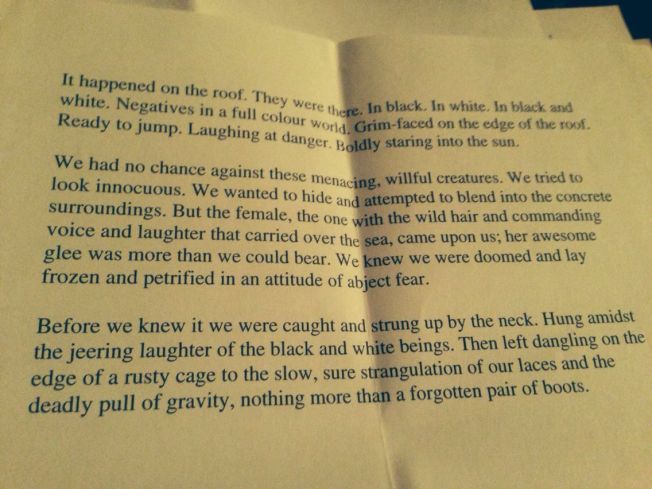